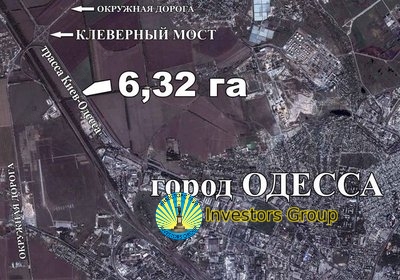 1. The object description:
The offered site is on a line Kiev — Odessa – the trunk main connecting Odessa with western and the central regions, Moldova and Romania, Belarus and Russia, is recently reconstructed highway of the state value. A cargo transportation (over 30 000 cars) the biggest for the lines leading to Odessa.
All site whole also is divided only by the state acts into 4 plots registered on one physical person and consist from: 1,76 hectares, 1,78 hectares, 1,76 hectares and 1 hectare.
2. The status:
— The state acts on an ownership right are given out on the basis of the order of Beljaevsky regional state administration of the Odessa area from October, 31st, 2006 and registered on November, 8th, 2006 in the Blotter of registration of the state acts on an ownership right on the earth and on the right of constant using by the earth.
3. A special-purpose designation:Under building and operation of a production warehouse complex.

4. Advantages of object:The site has good engineering — geological conditions, structures and green plantings aren’t present, engineering-transport structure is absent, but there are connection specifications to communications. Water supply is got on a site, an electricity in 100 meters through a line, or together with gas from the next enterprises within 1 km.
According to the developed general layout of a development of the city – the site soon will enter into city borders.
Opposite to a site to be authorized center «Mercedes», a building supermarket «New Line», repair base, warehouse complexes, including a class «And», the serving large international companies, autorefuelling.
All counter party from a line is already planned or built up by warehouses.
The site to be in the center of the file which is under intensive commercial building, close doesn’t remain any agricultural plot.
The site has a front exit on two excellent roads: on the one hand the site is adjoined by a line Kiev-Odessa – 72 meters, with another the asphalted road – 425 m.
Through 1,5 km asphalted the road leads to several warehouse complexes and the industrial organizations equipped with gas, water and an electricity. To a Ry branch of the leader on the item Odessa-western – 700 m.
The nearest autorefuellings are opposite to a site and on distance of 0,7 km and 1,4 km.
The Ry branch on the item of Usatovo to be in 100 meters across the road:
The Ry branch at station Odessa — Western to be 2,2 km
To Ry station Usatovo – 3 km.

The transport bridge which is in 1,5 kilometers, is an important traffic intersection – a place of crossing of the Odessa district road and the Kiev line. From the bridge motor transport, can leave to Kiev, Crimea, Ilyichevsk, Izmail, Reni, Kherson, Nikolays, Moldova, Donetsk, Dnepropetrovsk and other cities. The biggest customs terminal of area is on 1 km more close to Odessa.
At the moment not less than ten routes of a municipal transportation passes and stops in 10 meters from a site.
The size (the area of the ground area 63200 sq.), and the form (a pentagon with 2-mja right angles) — are convenient and not limiting possibility of various design-architectural decisions at building.
Unique and very successful arrangement of a site – an industrial zone a railway junction of Usatovo, leaves on the Kiev line, is directly on city border, the quiet relief, affinity of communications, absence of structures and green plantings – do a site ideal for building of a hypermarket, the logistic center, industrial organization.
The nearest food supermarket to be in a city – in 10 km from a site, i.e. no wholesale shops on an entrance to Odessa on the Kiev line up to the Odessa road service station – are present.
5. Distances: 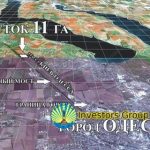 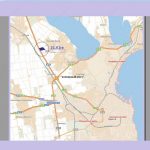